COVID-19 UPDATE Stay up to date with latest COVID-19 Information Read On...

Create an Account - Increase your productivity, customize your experience, and engage in information you care about.

Chadron is named for Louis B. Chartran, a manager of a fur trading post built in 1841 by Lancaster P. Lupton, near what are now the city reservoirs south of town.

The creek running nearby is named on early maps as Chartran's Creek.

The name was pronounced by French settlers as "shattron," and the pronunciation evolved into Chadron. Chadron's roots began at a site northwest of the present location of the city. 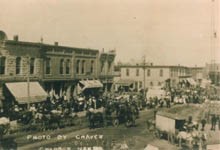 Homesteader Fannie O'Linn recognized the needs of a town to serve the rural people establishing farms in the area in the 1870s. She encouraged early businessmen to set up their shops on a portion of her claim near the confluence of the White River and Chadron Creek. She made no secret of her desire to call the new town O'Linn, although it was also known as Dakota, Shadrone, and other names. The population of the new town, whatever the name, grew to 500 by 1884.

Dawes County was split from Sioux County in July of 1886. The county was named for Nebraska Governor James Dawes who served two terms from 1870-1874. Just a few years later the southern part of Dawes County became Box Butte County as it is now.

In 1910 the Nebraska Legislature selected Chadron as the site for the college to serve the educational needs of western Nebraska. The first session was held during the summer of 1911.
Online Bill Pay
Agendas & Minutes
Council Videos
Live Council Videos
Notify Me
Jobs
Government Websites by CivicPlus®
[]